These cupcakes were for my sister’s homecoming weekend and were a hit! Please note they do contain alcohol in both the cupcake and icing so please bake responsibly but if you prefer not to include alcohol, you can replace mentions of alcohol with regular apple cider.

Preheat oven to 350° F. In a small saucepan, heat the butter over medium-low heat, whisking constantly. The butter will start smelling sweet and brown specks will appear, remove from heat and continue whisking for 30 more seconds.  Pour into stand mixer and let cool.  Once the butter is cool, add the buttermilk, egg, sugars and vanilla, and mix until well combined. In a separate bowl, sift together the flour, cinnamon, nutmeg, salt, and baking soda.  Gradually add the flour to the wet ingredients, scraping down the sides of the bowl after each addition.

Once the flour is fully incorporated, stir in the hard cider, being careful not to over mix.  Scrape the sides and bottom to make sure there aren’t any clumps. Spray cupcake tin with non-stick spray.  Insert cupcake liners and fill each a little more than halfway. Bake for 15-18 minutes, until a toothpick inserted in the center of a cupcake comes out clean.

Melt the butter in a medium-sized saucepan over medium heat. Add the apples, sugar, cinnamon, salt, and vanilla.  Cook for about 10 minutes on medium-low heat, stirring occasionally, until the apples are soft and have released their juices.  (It will smell delicious!)

In a separate bowl, whisk together the whiskey with cornstarch. Then add to the pan with the apples and cook for another 3 minutes, until the liquid thickens.  Set aside to cool.

Cream the butter for a minute or two.  Add the powdered sugar, cinnamon, and vanilla extract. Beat on medium speed until creamy. Add the whiskey, start with one tablespoon and add more until you reach desired consistency (I ended up using 2 tablespoons).  Beat on high for 2-3 minutes, until fluffy and whipped.

Core each cupcake with a cupcake corer (if you’re fancy like that) or a melon baller. 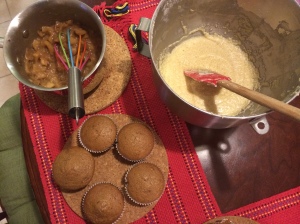 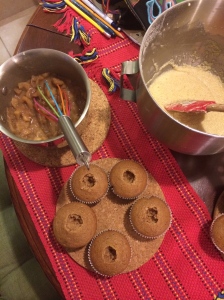 Fill the cupcake with apples, then top with buttercream frosting.  Garnish with any left over apples and enjoy! 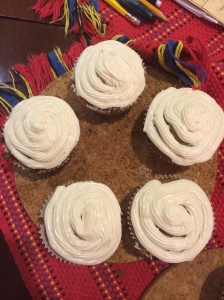 And here are some of our other Halloween festivities!

Baking is a joy that can be shared with the people you love! View more posts